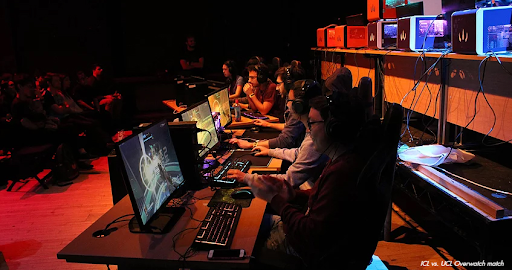 Esports has experienced a meteoric rise in the past decade and is saod that Esports is the Future, moving away from a pastime to a full-blown industry. With the barrier to entry being exceptionally low, anyone can become an esports sensation. Currently, the most popular games are; Fortnite, League of Legends, DOTA, and CS:GO, with many huge events aired all year around.

The largest event and biggest spectacle to date have to be the Fortnite World Cup in 2019, with a prize pool of $30m. The winner – 16-year-old Kyle Gierdorf (Bugha), claimed the top prize of $3m, a truly eye-watering figure. Nevertheless, this is just the beginning with many professional esports players now millionaires from prize money and sponsorship.

Currently, the highest-paid sports stars in the world are overwhelmingly baseball players with Messi (footballer) and Canelo Alvarez (boxer) also featuring in the top ten. Most in the top 100 are earning between $15m – $40m per year. So, will an esports star ever achieve such heights?

The answer is quite obviously yes. It is a question of when not if. Gaming is now easily the most popular pastime around the world and is growing exponentially. With the industry just starting in the 1970s, it is safe to say that video games are changing the world in front of our eyes. In the year 2010, the industry was worth $25bn, and now – $180bn, truly mesmerizing growth. Moreover, experts believe that it will continue to keep growing especially with the ascent of cloud gaming and Virtual Reality (VR).

READ  4 Vacations To Add to Your Bucket List Today

Recently, mobile gaming has taken off in multiple genres, now being the largest platform whereby people like to play games. A pioneer in the industry was candy crush which created the start of in-app purchases. In the 2010s we have also seen the emergence of mobile betting, allowing players to play their favouite table games on the go. Another major technological advancement is that of cryptocurrency, which can be used for purchasing different products, and now, it can be used in iGaming. If you are into crypto and enjoy popular games like roulette and blackjack, there are comparison sites that find the best Bitcoin gambling sites. Online portals help with finding the most generous welcome bonuses, advise on how to claim them, and give tips on depositing Bitcoin. Crypto has also been adopted by gamers as a way to tip one another. This has also been a popular payment method due to its anonymity but currently, not all operators have Crypto as a payment option.

The most-watched event in the world is the FIFA World Cup, which has a viewership of over 1 billion spectators. When it comes to esports, the highest watched event was the Free Fire World Series Singapore 2021 with 5.41m peak viewers. So, from the statistics, there is still a way to go, nonetheless, there are a plethora of competitions, and many of the figures omit China. Twitch is the most popular streaming platform for esports games, whereas for regular sports it’s still TV. The future is bright, with experts predicting worldwide esports viewership will grow to 519 million by 2024. Moreover, many esports events are offline too and are watched by tens of thousands in an action-packed stadium, just like regular sports. The largest event and biggest spectacle to date have to be the Fortnite World Cup in 2019, with a prize pool of $30m.

READ  5 Tips on how to Prepare for a Business Trip

As esports grips the world but is Esports is the Future?, even the IOC have added their support with the Tokyo Olympic Games running a “Virtual Series” featuring competitions in auto racing, baseball, cycling, rowing, and sailing. Furthermore, other major sports organizations have their own esports teams especially when it comes to games like FIFA. All the major clubs, from Barcelona to Bayern Munich have a team with professional players, as nowadays FIFA is more popular than playing actual football.

In conclusion, esports has grown exponentially in the past couple of decades and nothing looks like the trend will be stopped. Gaming is enjoyed by everyone, of all ages and brings people together just like regular sports do. New games are being developed all the time, with some becoming overnight successes such as Fortnite. The 2020s will be a defining moment for the esports industry, and who knows, by 2030, will the highest-paid sportsman in the world be in esports? Only time will tell. But for sure, it will continue to grow in popularity and prize pools.

How Much Does FedEx Insurance Cost?